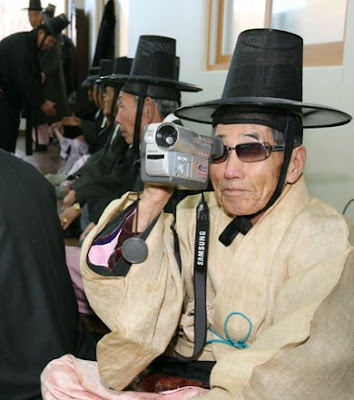 A picture is indeed worth a thousand words. In this photo [from the chosun.com], a 86-year Korean man in a traditional attire of the bygone era uses a "made-in-Korea" camcorder to record the festivities of the celebration of the 400 year anniversary of the city of Gangneung. Within his lifetime, this man and his peers witnessed a remarkable and speedy transition of Korea from feudalism to modernity. When this man was born, Korea was predominantly an agarian society under the Japanese colonialism.

From the ashes of the Korean War, both sides of Korea went full steam with industrialization programs. While North Korea's industrialization peaked in the 60s but languished since then, South Korea's export-driven modernization drive, though laden with societal inequities and labor strifes, kicked off in the 70s and South Korean economy is now in the league with other advanced economies. South Korea leads in shipbuilding, semiconductors, automobiles, consumer electronics, plasma televisions, mobile phones, robotics, and now, genetic engineering.

Despite the advancements in the South Korean economy however, pitfalls and challenges remain: financial upheavals tied to the global economic systems and trends, the plight of migrant and "irregular" workers, environmental degradation, income and wealth disparities, fierce competition in education and workplace, improper business practices overseas that exploit local labor, ambitious business plans overseas that are likened as "neocolonial," etc. Now, ethical questions arise, such as stemming from experimentation and progress in genetic engineering, as the recent news of cloning pets for profit suggest. The recent tragedy of the deaths of tenants stemming from forced eviction due to a redevelopment plan also shows the deadly side of the economic angst.