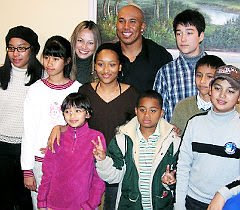 Among Pittsburgh Steelers players celebrating the Super Bowl victory yesterday was Hines Ward (pictured above with multiracial children in South Korea). When Ward, whose father is an African-American and mother is a Korean, won the Super Bowl MVP in 2006, he became an instant celebrity in South Korea. Ward used his status to highlight issues facing multiracial children in Korea, who face discrimination from the Korean society.