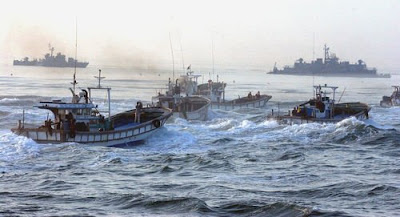 North Korea unilaterally declared on Friday that it was scrapping agreements it had signed with South Korea to ease military tension on the Korean Peninsula. Specifically, the 1991 agreement on reconciliation and non-aggression is mentioned as being defunct, as well as North Korea’s promise that it would honor the western sea border claimed by South Korea, pending a final resolution to the on-going controversy that sometimes resulted in violent naval clashes (as seen in the photo above).

So, is the Cold War back in Korea? It began early last year with the incoming Lee Myung-bak administration of South Korea reversing previous two administration's rapproachement policy towards the North and changing course to more harline approach. North Korea retaliated with near closing of the border and ending South Korean tourism to the North. Now, both sides are on high military alert. A renewed naval clash in the West Sea (Yellow Sea) border area is feared.

With these ominous developments comes Pyongyang's surprise statement. This is most unfortunate since inter-Korea agreements on reconciliation and non-aggression were high diplomatic breakthroughs that led to easing of tensions in the Korean Peninsula and showed to the world the possibilities of inter-Korea rapproachement. Irregardless of Seoul's recent cold attitude towards North Korea, Pyongyang should not politicize the situation and throw away the principles of reconciliation and non-aggression specified in those agreements. Both sides are bound to lose face if current standoff escalates into a military confrontation -- the two sides should cool off and work towards a diplomatic solution.