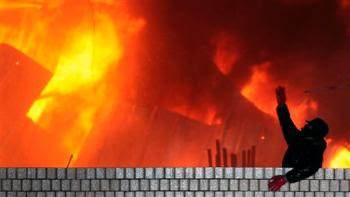 Is the Lee Myung-bak government of South Korea regressing to a police state? Excessive use of force by the police in suppressing public protests have increased over the past year. Now, an incident involving forced eviction of protesting tenants opposed to redevelopment has resulted in six deaths. (Photo by the AP/Yonhap) Not since the heydays of past military dictatorships in South Korea has there been such a violent encounter by the police with protesters. The protesters in this case were small businessmen and tenants who were asking for better compensation for their relocation due to a redevelopment plan in central Seoul. In these times of economic hardships, such a demand sounds legitimate and a care should have been used in resolving the standoff, rather than resorting to the use of police commandos.