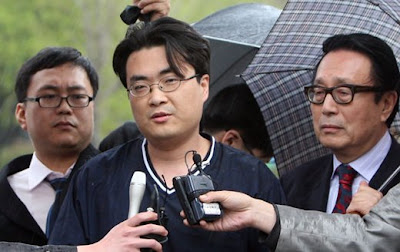 Followup to: A Blogger Is Arrested in South Korea: A Return to Repression?

The arrested blogger "Minerva" (revealed as Park Dae-sung, pictured above) has been released free of all charges. The court found no grounds that Park willfully spread false financial information over the Internet. Had he been convicted, South Korea would have had an embarassing PR fiasco, with a glaring contradiction of infringement of the freedom of speech in the most wired nation on earth.
The prosecutors' zeal in using an outdated communications law to arrest Park showed a series of repressive measures implemented by the Lee Myong-bak administration to silence the opposition and dissent -- in a way, regressing towards the repressive era of the past. Even the Amnesty International, which had been critical of South Korean governments' human rights violations in the 70s and 80s, recently issued a cautionary report called "Policing the Candlelight Protests in South Korea."