A Blogger Is Arrested in South Korea: A Return to Repression? 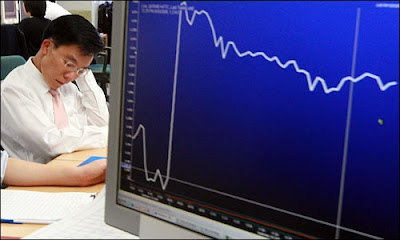 -- The police has used excessive force in controlling the peaceful, candlelight protests against U.S. beef import during the summer of 2008.

-- The government has moved to restrict public assemblies and demonstrations with threats of arrests, even for baby-stroller-carrying moms (who were seen in great numbers during candlelight protests).

-- Press freedoms have been curtailed, as the government tries to make changes in the management of major broadcast media which amount to political interference, and trying to control television programs that are critical of the government.

-- Religious repression is cited by the Buddhists, who claim that the pro-Christian government (Lee Myung-bak is a Christian elder) is promoting hostility toward Buddhism.

-- The National Security Law, the draconian law that was used excessively and arbitrarily by past dictatorships to curtail the opposition and legitimate dissent, is being revived, as in the case of Chung Young-chul, a U.S. permanent resident who was arrested on charges of espionage for North Korea, based on his contacts with North Koreans at the U.N. Mission in NYC and "unauthorized" visits to North Korea -- which were no more than casual encounters and visits made by many South Koreans in the past decade under the official atmosphere of inter-Korea exchanges.

Now, a blogger has been arrested. The charge? Spreading false online information with a harmful intent that adversely impacted the financial landscape of Korea. The government must have been ired by the blogger's (aka "Minerva") dire forecasts for the Korean economy (most of which turned out to be true) and criticisms of Lee Myung-bak's economic policies. So, instead of addressing the economic turmoil in South Korea, Lee has the blogger detained and blames him for causing damages to the Korean economy.

This situation has made South Korea, the most wired nation in the world, a laughing stock of the world as observers see this as an infringement of the freedom of speech and an attempt to silence online dissent.