European Travellers Go from Vienna to Pyongyang via Railroad 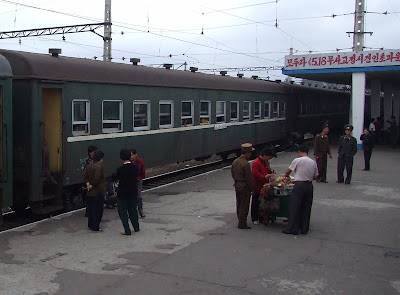 Two European railroad travel buffs travelled from Vienna to Pyongyang via the tran-Siberian railway and somehow managed to get into North Korea through the less-travelled Russia-Korea border at Hasan/Tumangan. Though the railroad crossings at the China-Korea border at Dandong/Sinuiju are used by foreign tourists, the route from Russia has been closed off to foreigners. These travellers have an extensive travelogue with many photographs of North Korean railroad stations (above) and adjoining countryside where the fields seem to be having good crops (see below), despite the recent news of bad agricultural yields due to drought.

These adventurous travellers in effect engaged in citizen diplomacy by befriending North Korean railroad workers. Perhaps someday the Russia-Korea railway will become a busy route that harbors a regional economic development in that region, like the proposed Greater Tumen Initiative. 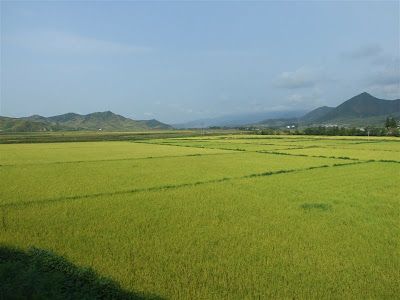 Dear whom it may concern ,

My name is Jay who work for homestayKorea (http://www.homestaykorea.com) as a customer service assistant manager.

If you do not mind , we ‘d like to ask you to have an opportunity that we can proudly present your articles in blog via our internet web site.

At the moment , we are trying to remake our Internet website to improve.

When we visit your blog , we feel that we found last piece of puzzle which can make something perfect.

We believe that the homestaykorea’s internet web site will offer very unique and special information to many visitors through your articles in blog.

For a long time, we are trying to share the very helpful information with visitors who are interested in Korea or homestay service in Korea.

The HomestayKorea found in 1998, recently, around 7000 member of homestay houses through out Korea join the company and many travelers, backpackers from many different countries have tried homestay service .

Through cooperating with Korean tourism organization and Korean culture and information service, the company has been named the official host to the Republic of Korea official homestay promotion service in 2002 world cup game.

Even you do not accept what I suggest you, please send me a reply to know your opinion