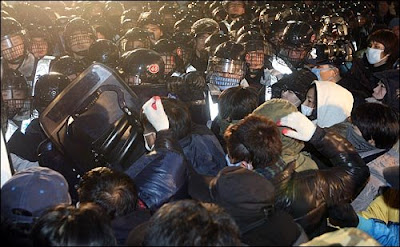 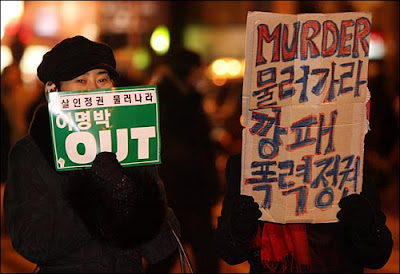 Followup to: South Korea Regressing to a Police State?
On Jan. 23, thousands of angry Korean citizens in Seoul gathered near the site of the tragedy (police raid on protesting, evicted tenants) that took six lives, despite the frigid cold and the lunar new year holidays, to protest the Lee Myung-bak government, calling for the removal of "murderous, thug government" (as seen in the photos by OhmyNews, article in Korean). Some protesters remarked that "South Korea is reverting to the 80s, turning worse than the period of then-military dictator Chun Doo-hwan, who did not dare kill squatters."
This development comes at a bad time for Lee Myung-bak, whose presidential campaign promise was the elevation of South Korea to more advanced economy status with high growth rate (7% growth), but has seen the South Korea economy deteriorate (negative 5.6 % growth) the most since the Asian financial crisis of 1997-98. This drop is due in part to the effects of global financial meltdown, but the Lee administration is criticized for mishandling economic policies in general, despite Lee's past experience as a CEO of major Korean firm. His change of Cabinet members has not helped. Moreover, his approval rating has dropped to 20 percent.
With so many sectors of Korean society criticizing the Lee government, there may be big scale anti-government protests -- likes of those seen during the military dictatorships in the 80s -- when the weather thaws.

Who knows where to download XRumer 5.0 Palladium?
Help, please. All recommend this program to effectively advertise on the Internet, this is the best program!