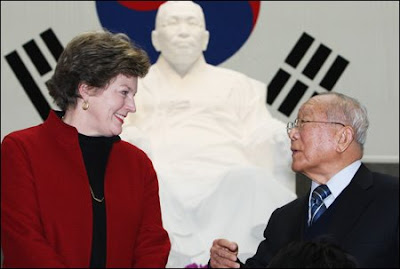 Looks like Ambassador Kathleen Stephens is doing well in South Korea, having settled in Seoul after a long confirmation process in the U.S. Senate. She is particularly liked by Koreans (perhaps the most liked of all U.S. ambassadors to Korea), helped by her eagerness to use her Korean language skills and her interest and caring of Korean history and affairs. In a recent interview with The Hankyureh, she said: “I think the division of Korea was the 20th century’s most painful and tragic accident. I hope there will eventually be a reunification. I believe in change because of my experiences in Korea and because I saw the end of the Cold War in Europe. I believe change will also come to the Korean peninsula. We now have a president who believes in change, don’t we?”

Amb. Stephens also paid a visit [photo above, from Yonhap] -- the first time for a U.S. ambassador -- to a Seoul museum that honors the late Kim Koo, a popular leader of the Korean independence movement against the Japanese occupation of Korea and a reunification activist who had advocated the independent reunification of Korea since the division in 1945 but who was assassinated in 1949. Stephens told reporters that she was visiting the museum with her son to learn about Korean history, as "it gives us a lot of insight into… a very, very important and challenging time in Korean history.''

Indeed, Kim Koo was initially favored by the U.S. Military Government in Korea (that was set up in the southern half of Korea in 1945 till 1948) as the leader of eventual Korean self-government, but he lost favors when he opposed the unilateral move to establish a separate government in southern Korea, arguing that such a move would solidify the division of Korea. Instead, Kim Koo's rival Syngman Rhee (who was impeached by the Korean Provisional Government in Shanghai before Korea's liberation for abuse of his powers), who wanted to become a president of Korea -- even if it meant just a half of Korea -- became the first president of the Republic of Korea in 1948, and was supported by the U.S. despite his prolonged dictatorial rule until he was overthrown in a popular uprising in 1960 and spent the rest of his life in exile in Hawaii.