Korean Reactions to the Gaza Conflict 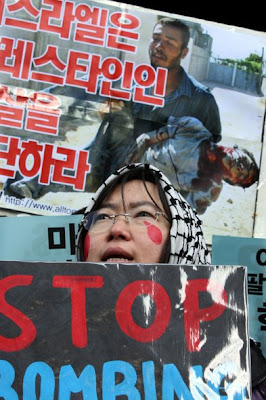 While some civic and political organizations in Seoul protested the Israeli invasion of Gaza (photo on the left, from The Hankyoreh), the South Korean government, after a week of silence on the conflict, announced that it would provide $300,000 worth of emergency humanitarian aid to the Palestinian people and also called for an immediate truce between Israel and Hamas. It looks like the conservative Lee Myung-bak administration is carefully weighing the balance of the alliance with the U.S. and South Korea's business interests in the Middle East, where lucrative business contracts abound.

I recently came accross your blog and have been reading along. I thought I would leave my first comment. I dont know what to say except that I have enjoyed reading. Nice blog. I will keep visiting this blog very often.