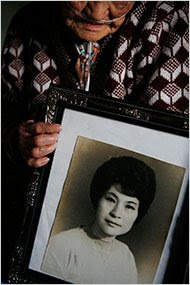 The New York Times featured a story, "Ex-Prostitutes Say South Korea and U.S. Enabled Sex Trade Near Bases,"about Korean prostitution near U.S. military bases in South Korea. [Photo on the left by the International Herald Tribune shows an ex-prostitute, now 80 years old, holding a photo of herself when she was 29.]

Most Korean women became involved in the trade to escape poverty in the postwar 1950s to 1980s, but a coersion by the past authoritarian South Korean governments and a complicity by the U.S. military helped maintain and sustain a thriving sex trade around the bases (called "Camptowns").

The Park Chung Hee government, in essence, encouraged the sex trade around U.S. bases as a mean to earn dollars in its modernization efforts (according to Prof. Katharine Moon of Wellesley College, Camptown prostitution and related businesses on the Korean Peninsula contributed to nearly 25 percent of the Korean GNP during this time) and used it to encourage U.S. troops not to leave Korea, in the same way that it brought the Japanese men en masse to Korea for "sex tourism" during the 70s.

The women in my film are from this area. They came to the US after the IMF crisis.
Check out"happy endings" a doc film on Asian massage parlors in Rhode Island where prostitution is legal. Check the blog and youtube channel and leave comments. Sign up on the website to get updates on the release.
http://www.happyendingsdoc.com
http://happyendingsdoc.wordpress.com
http://www.youtube.com/happyendingsdoc
http://www.facebook.com/home.php?ref=home#/group.php?gid=40775235587