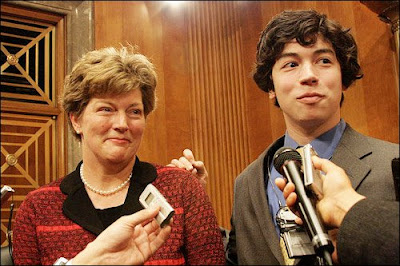 The next U.S. ambassador to South Korea, Kathleen Stephens, went through her confirmation hearing at the U.S. Senate on April 9.

Having worked and lived in Korea using a Korean name Shim Eun-kyung, Stephens speaks fluent Korean and said she will do “a lot of listening and learning" and "ask the forbearance of my audiences as I attempt to improve my Korean language ability and to use it to understand better a culture and people I respect so deeply." Perhaps to reinforce this, she brought her son John (photo) to the hearing, whose father was a Korean, and introduced him as a bicultural "bridge-builder."

Bridge-building will surely be needed to accomodate for changing dynamics in US-Korea relations (both with South and North Korea) and in pursuit of negotiated settlement on nuclear disarmament and normalization of relations.

Her son's name is James.

Who is James' father?

im jame's cousin, i'm not going to give you his name but i'm proud of my aunt kathy and i have the utmost confidence in her abilities as ambassador