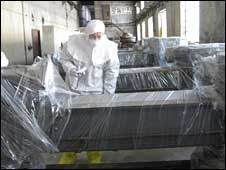 Followup to KR posting, Thawing of US-NK Relations -- Will It Stick This Time?

Again, the road to US-NK normalization bumps into another hurdle. North Korea is said to have started restoring its nuclear facilities after it stopped disabling them (the photo shows the previous disablement process at the Yongbyun nuclear facility), accusing the US of failing to lift NK from the list of states sponsoring terrorism, as stated on the six-party agreement. Washington wants a verification protocol in place before this to happen.

So, North Korea's nuclear disarmament issue is likely to surface high on foreign policy debates of the 2008 presidential election in the US.