Thawing of US-NK Relations -- Will It Stick This Time? 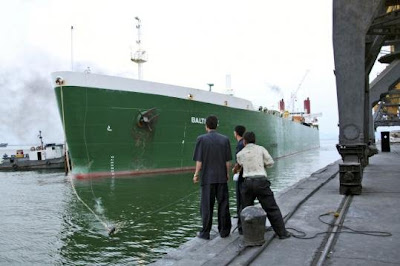 Ironically, it turns out that George W. Bush --who labelled North Korea as an "axis of evil"-- is the US president to lift the application of the Trading with the Enemy Act on North Korea that has been in place since the Korean War. This symbolic gesture, coupled with the intent to rescind North Korea's designation as a State Sponsor of Terrorism, paves a way towards Washington's normalization of relations with Pyongyang as outlined in the six-party agreement on nuclear disarmament and normailization of relations in Northeast Asia. (see the State Department release)

In another development that foreshadows the thawing of tensions, a US cargo ship docked in Nampo, a North Korean port (photo), to unload 37,000 tons of wheat, as a part of the UN World Food Program that aims to alleviate famine in North Korea. North Koreans will see more of US food aid as the US will contribute the bulk of the World Food Program this year, and as food aid from South Korea is curtailed due to souring in inter-Korean relations. In a departure from past practices, North Korea has opened up for more monitoring of food distribution by foreign observers.

These are good signs and there is a room for optimism that the long-overdue settlement of nuclear disarmament/normalization of relations will finally come to be realized.