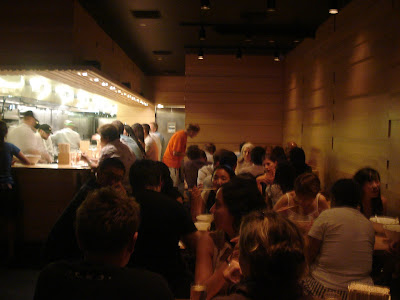 Recent Korean film blockbuster and TV series "Sik Gaek" (Food Guest) have stimulated Koreans' interest in gourmet Korean food and a potential fusion of Korean food globally. But the reality is that, unlike Chinese or Japanese cuisines, the Korean cuisine, though numerous in cities populated by the Korean diaspora, has not been able to incite wide acceptance by non-Koreans.

An exception is New York City, where a number of restaurants with Korean-inspired fusion dishes (including popular all-vegetarian restaurants) have sprung up and have gained notice of food critics as well as loyal customers. One prime example is momofuku (photo), a "hot buzz" restaurant chain set up by a Korean-American chef-of-the-year David Chang, which offers Korean-inspired dishes and authentic Japanese ramen with gourmet flairs. Chefs and staff are non-Koreans and customers are mostly non-Koreans. This may well show a formula for success in popularization of Korean cuisine.

Labels: Culture, Korea Report News, Koreans in the US