The South Korean Massacre at Taejon: New Evidence on US Responsibility and Coverup 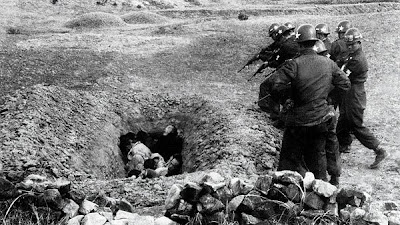 Article by Prof. Bruce Cumings
In July 2008 the world media heralded the arrest of “the world’s most wanted war criminal,” Bosnian Serb leader Radovan Karadzic. He had been in hiding for thirteen years, ever since he was charged with genocide by the United Nations war crimes tribunal in The Hague for his role in the massacre of some 8,000 Muslim men and boys in Srebrenica. These events were subsequently termed “Europe’s worst slaughter of civilians since World War II.”
Fifty-eight years earlier, in another distant July, the North Korean People’s Army bore down upon the city of Taejon, south of Seoul. Police authorities removed political prisoners from local jails, men and boys along with some women, massacred them, threw them into open pits, and dumped the earth back on them. Somewhere between 4,000 and 7,000 died, and their stories remained buried for half a century. American officers stood idly by while this slaughter went on, photographing it for their records, but doing nothing to stop it. In September 1950 the Joint Chiefs of Staff decided to keep these photos classified; they were not released until 1999. Read on

Anything either Charles Hanley or Bruce Cumings needs to be fact checked to the nth degree. Hanley's article/book on No Gun Ri has been thoroughly discredited (e.g., bad/false witnesses, factual impossibilities, etc.), though it's no surprise the Cumings would refer to him so much.