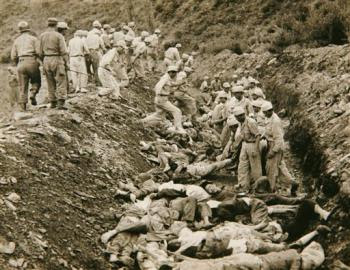 More revelations (or verifications of what Koreans had suspected) are coming out from the Korean truth commission investigating atrocities committed by South Korean authorities during the Korean War:

"Grave by mass grave, South Korea is unearthing the skeletons and buried truths of a cold-blooded slaughter from early in the Korean War, when this nation's U.S.-backed regime killed untold thousands of leftists and hapless peasants in a summer of terror in 1950.
With U.S. military officers sometimes present, and as North Korean invaders pushed down the peninsula, the southern army and police emptied South Korean prisons, lined up detainees and shot them in the head, dumping the bodies into hastily dug trenches. Others were thrown into abandoned mines or into the sea. Women and children were among those killed. Many victims never faced charges or trial.

The mass executions — intended to keep possible southern leftists from reinforcing the northerners — were carried out over mere weeks and were largely hidden from history for a half-century. They were "the most tragic and brutal chapter of the Korean War," said historian Kim Dong-choon, a member of a 2-year-old government commission investigating the killings." See more.

The photograph, taken by the U.S. Army and provided by the U.S. National Archives in College Park, Md., on May 5, 2008, is one of a series of declassified images depicting the summary execution of South Korean political prisoners by the South Korean military and police at Daejeon, South Korea, over several days in July 1950.