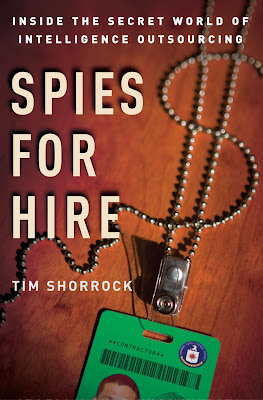 Investigative journalist Tim Shorrock, known to Koreans for his writings that revealed the US's role in the violent 1980 military crackdown in South Korea that triggered the May 18 citizens’ uprising in the city of Kwangju, has written a new book, Spies for Hire.

"In Spies for Hire, investigative reporter Tim Shorrock lifts the
veil off a major story the government doesn't want us to know about -- the massive outsourcing of top secret intelligence activities to private-sector contractors.

Running spy networks overseas. Tracking down terrorists in the Middle East. Interrogating enemy prisoners. Analyzing data from spy satellites and intercepted phone calls. All of these are vital intelligence tasks that traditionally have been performed by government officials accountable to Congress and the American people. But that is no longer the case." See more information. See also his overview article in The NY Post.