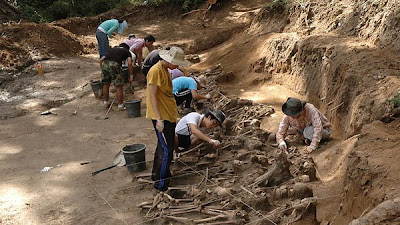 The New York Times today carried an extensive report with a photo slide show describing the work of the Korean Truth and Reconciliation Commission, which has unearthed many remains of atrocities committed by South Korean authorities against its own civilians during the Korean War. Until recently, South Korean authorities blamed North Korean troops' atrocities on South Korean civilians during the war (which were mostly committed by South Korean communists bent on vendetta), but have not acknowledged or revealed the extent of mass slaughter of their own citizens, some of which occurred prior to the Korean War, in campaigns to wipe out leftist forces and sympathizers.
Never again -- for this painful history not to repeat itself, the peace and reconciliation process in Korea must contiue to ensure genuine and lasting peace in Korean peninsula.