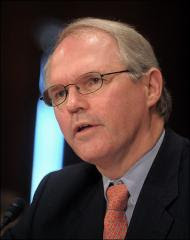 "North Korea has slowed the dismantling of its nuclear reactor because it hasn't received the amount of fuel oil it was promised, State Department envoy Christopher Hill said Wednesday.
Testifying before the Senate Foreign Relations Committee, Hill [pictured]confirmed that North Korea's delay in dismantling the Yongbyon nuclear plant was in response to what it perceives as slow delivery of the oil...

'There is a perception among the North Koreans that they have moved faster on disablement than we have on fuel oil,' said Hill... North Korea, he said, has received about 20 percent of the 1 million tons of heavy fuel oil that it was promised in exchange for disabling the reactor. The shipments were to move in tandem with the disabling of the plant." More news

When the media covers the recent snag in the six-party process of nuclear disarmement in North Korea, the usual focus is on North Korea missing the Dec. 31 deadline of the declaration of its nuclear programs, but another dimension to the controversy is revealed here. The ongoing dispute between Washington and Pyongyang seems to stem from the two sides' subjective interpretation of the clause 5 of Joint Statement of the Fourth Round of the Six-Party Talks (Beijing, September 19, 2005): "The Six Parties agreed to take coordinated steps to implement the afore-mentioned consensus in a phased manner in line with the principle of 'commitment for commitment, action for action.'"