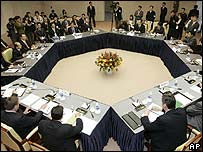 The promised multilateral settlement on North Korea's nuclear and security issues began on a wrong foot as soon as the new year started, with conflicting reports on the extent of North Korea's reporting of its nuclear activities. See news item.

Although a technical delay in the implementation of the six-nation Oct. 3, 2007 agreement on nuclear disarmament was expected and is tolerated by the parties involved, this latest controversy has the potential to derail the multilateral peacemaking process. Given the high stakes, all parties should review their respective obligations under the Oct. 2007 agreement and refrain from reverting back to brinkmanship actions and counter-actions. Existing platforms such as the six-nation meeting (pictured) and active diplomacy should be used to resolve this issue. See an analysis on this issue, which was made just prior to the Dec. 31 deadline of North Korea's nuclear report.