A Background on Korea Report 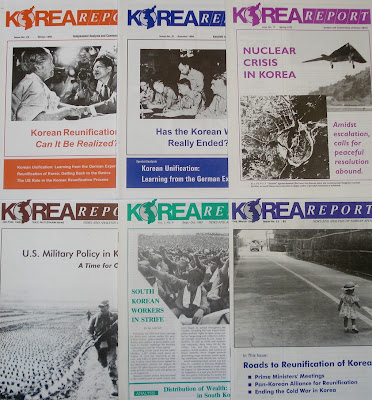 Korea Report newsblog is actually a "reincarnation" of Korea Report newsmagazine (pictured) that was published in the late 80s to mid 90s by a group of Koreans in the US, which aimed to be "a major non-governmental source of information and analysis on history and current situations of Korea (boths sides of Korea), and international relations with Korea." Topics covered were democracy, peace, labor, farmers and NGO movements in South Korea, support and related movements in the US; inter-Korean reconciliation and reunification efforts; US policy and military presence in Korea including tactical nuclear weapons; and the first nuclear crisis of 1993.

All this was before the Internet age, when information and resources on the developments in the Korean Peninsula were hard to come by generally, especially in the US media. KR in print format filled the void, identifying issues and policy controversies needing attention and resolutions, relaying the news of grassroots and NGO movements of South Korea and the US, and alerting the international communities on the pressing issues facing the Korean Peninsula and Northeast Asia.

Now, as we live in a new age where the Internet has shown us many new information-gathering possibilities and a plethora of available and sharable resources, the editor of the original Korea Report is continuing the KR tradition with a new medium by compiling pertinent news and developments on crucial issues while providing insights and historical perspectives, building a go-to repository of highlights and resources on inter-Korea reconciliation efforts and multilateral efforts for peace in Northeast Asia, and presenting perspectives of Korean diaspora on Korean peninsula issues.

The blog format allows instantaneous and dynamic information and idea sharing possibilities, as well as opening new global outreach potentials. The new Korea Report aims to promote "the reconciliation of peoples and nations affected by the Korean division, a lasting peace in Northeast Asia, and reunification of Korea" by providing relevant information and resources and fostering dialog and mutual understandings amongst policymakers, academia, the media, activists, and the general public to that end.

Please help Korea Report grow by making frequent visits, referring the site to your friends and colleagues, joining in the discussions, or sending in your comments and submissions to KoreaReport@gmail.com