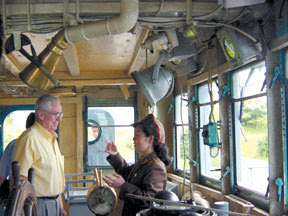 Former CIA officer and U.S. ambassador to South Korea Donald Gregg (pictured inside the captured USS Pueblo in his previous trip to Pyongyang), along with former defense secretary William Perry and former deputy assistant secretary of state Evans Revere (current president of the NY-based Korea Society), will be attending the Feb. 26 concert by the New York Philharmonic Orchestra in Pyongyang, and are said to use the occasion to urge North Korean officials to move forward quickly on the six-nation denuclearization agreement.

Gregg has been a supporter of engagement policy towards North Korea and Perry was in the office during the previous crisis over nuclear issue. Though these citizen diplomacy may help, some commentators are saying that a visit by the Secretary of State Condaleezza Rice may break the impasse. See previous KR posting: A Letter That Made Headlines: Bush Sends Letter to Kim