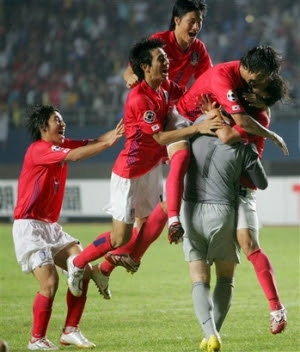 Inter-Korea soccer matches fostered inter-Korean reconciliation (see previous KR posting, Sports and Reconciliation in Korea), but an upcoming World Cup qualifying game in North Korea, in which the teams from the two sides of Korea are slated to compete, has sparked old contention and friction due to the disagreements over the use of national anthems and flags. See the coverage in a soccer news website.

North Korea wants to use joint flag (depicting Korean peninsula) and anthem (old Korean folk song). On previous occasions, joint flag and anthem were used in inter-Korea friendly games or when marching together in international sporting events, but this game being a FIFA match with a high stake for the World Cup, South Korea wants to use its own flag and anthem -- which are bound to irritate North Koreans on their own soil.

If the two sides cannot come to an agreement, the match may move to another country. That would be a pity, since it would show to the world that politics got in the way of sports again. Looks like in this case, North Korea needs to show some flexibility. As North Korea competed in international games in South Korea under its flag, it may need to allow South Korea to compete in North Korea likewise. Didn't North Korean authorities show real flexibility by allowing the US national anthem to be played in North Korea at the upcoming concert by the New York Philharminic?