A Letter That Made Headlines: Bush Sends Letter to Kim

A diplomatic letter sent by President Bush to Chairman Kim Jong Il of North Korea made headlines around the world. Although this gesture reaffirms the commitments made through the six party agreement on nuclear disarmament and securiy issues, it is remarkable in that it is a first direct communication from Bush to Kim, which signifies complete turnaround in Bush administration's approach to North Korea and intensified efforts to reach a negotiated settlement. All signs, with optimistic gestures from both sides in 2007, lead to the fulfillment of negotiated settlement over North Korea's nuclear program as well as concurrent US-DPRK normalization efforts (and less secure Japan-DPRK normalization). 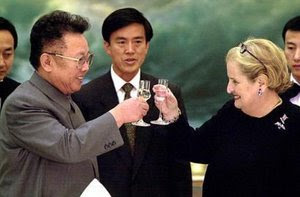 We've been on this road before. The first nuclear crisis was abated by Bill Clinton's approach to negotiated settlement (which George W. Bush denounced until recently), which culminated in the unprecedented visit by Secretary of State Madeleine Albright to Pyongyang (pictured) in 2000. A state visit by Clinton to North Korea was contemplated but did not materialize due to lack of preparation time in his last remaining days in the office. Clinton however visited Vietnam, another old enemy which the US reconciled.

Will we see another bout of similar diplomatic push? A visit by Condoleezza Rice to North Korea, as suggested by the South Korean officials? Or Bush showing up in Pyongyang? These are no longer far-fetched ideas, but time is running out.