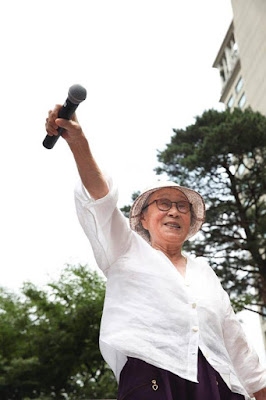 Kim Bok-dong was born in 1926 in Yangsan, South Gyeongsang Province. After completing the fourth grade of elementary school, she helped out with household chores until the age of 15. Her mother had told her stay close to home because “the times were strange.”

One day in 1941 – she can’t remember if it was the spring or the fall – Japanese people in yellow uniforms without rank badges came to her house, accompanied by her village leader and another official. Kim was told she needed to work for three years at a factory making army uniforms – and if she didn’t go, her family would be kicked out of their house and their property seized.

Figuring that it wouldn’t kill her to work at a factory, Kim told her mother she would go. At the age of 15, she was taken to Taiwan and then on to a Japanese military unit based in China’s Guangdong Province. How different her life would have been if she hadn’t gone with the Japanese back in 1941!
READ MORE