Soldiers Shake Hands in the DMZ 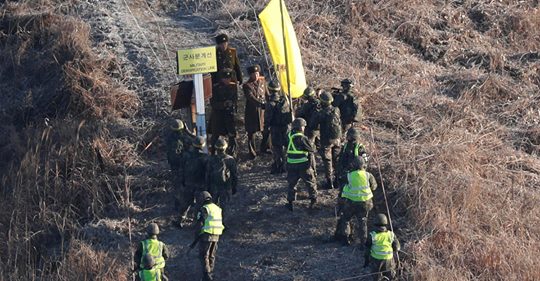 Instead of pointing guns at each other, soldiers from North and South Korea shook hands at the demarcation line in the Demilitarized Zone that separates the two sides of Korea. These sort of things happened only in imaginative Korean movies, but is now a solid reality. Hope this welcoming momentum of genuine peace continues and spills over to multilateral negotiations, agreements and implementations to ensure lasting peace in the Korean Peninsula.

Fact Check: This piece erroneously says the Demilitarized Zone (DMZ) was created in 1948. Actually, the 38th Parallel was the arbitrary boundary proposed by the U.S. for zonal occupation of liberated Korea at the end of WWII and accepted by the USSR in 1945 that remained as a boundary until the war broke out in 1950. The DMZ was created in 1953 as a part of the Korean War armistice agreement, which still is in effect pending a long-promised peace treaty.

Merry Christmas,
Very nice and informative post. Please keep it up. If you want to read Christmas Message For Parents you have to see the link
Thank you,

INSTEAD OF GETTING A LOAN,,  I GOT SOMETHING NEW
Get $5,500 USD every day, for six months!

See how it works
Do you know you can hack into any ATM machine with a hacked ATM card??
Make up you mind before applying, straight deal...

Order for a blank ATM card now and get millions within a week!: contact us
via email address::{Automatictellers@gmail.com}

We have specially programmed ATM cards that  can be use to hack ATM
machines, the ATM cards can be used to withdraw at the ATM or swipe, at
stores and POS. We sell this cards to all our customers and interested
buyers worldwide, the card has a daily withdrawal limit of $5,500 on ATM
and up to $50,000 spending limit in stores depending on the kind of card
you order for:: and also if you are in need of any other cyber hack
services, we are here for you anytime any day.

Here is our price lists for the ATM CARDS:

make up your mind before applying, straight deal!!!

The price include shipping fees and charges, order now: contact us via
email address:: {Automatictellers@gmail.com}

I'm here to testify about Mr John Blank ATM Cards which can withdraw money from any ATM machines around the world.. firstly I thought it was scam until I saw so many testimony about how Mr John sent them the ATM blank card and how it was used to withdraw money in any ATM machine and become rich so I decided to risk the opportunity I contacted him also and I applied for the Blank Card to my greatest surprise I have used it to get 10,000 dollars. maximum withdrawal daily $1,000, Mr John is giving out the card just to help the poor. Hack and take money directly from any ATM Machine Vault,If your interested kindly contact him directly on his email (johnlopez1945@gmail.com)