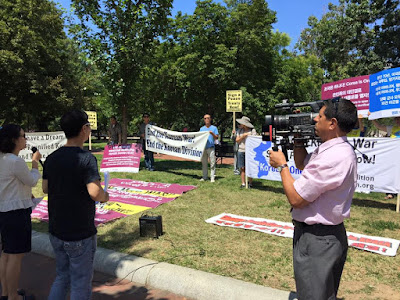 August 15, 2015 marks the 70th anniversary of Korea’s liberation from the Japanese colonialism, and also the 70th anniversary of Korea’s division into two occupying zones that led to a tragic war and divided states, with seemingly perpetual animosities and conflicts.
2015 is also the 62nd anniversary of the signing of the Korean War Armistice, an armistice that has not been replaced with permanent peace treaty that will officially end the Korean War. Without a peace treaty i...n place, occasional military confrontations, spiraling arms race, collective suspicions and hostilities ensue without an end in sight.


On August 15, where numerous events marking the day took place in Korea and overseas, the National Campaign for Peaceful Resolution in Korea also held activities in the DC area (a rally at the White House and a forum at The William Cho Peace Center in Fairfax, VA. The Campaign calls for "the signing of a peace treaty to end the Korean War as a prerequisite first step, and urge the stakeholders and policymakers to engage in negotiations aimed at reduction of tensions that will pave a way for a lasting peace settlement in the Korean Peninsula that includes normalization of relations, nuclear disarmament and conventional arms reduction."