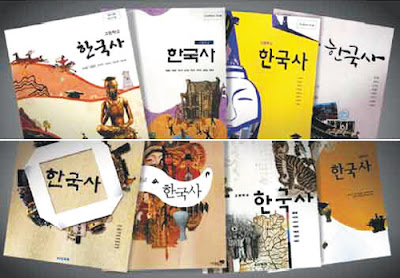 Below is a dated New York Times editorial, but it is still pertinent in light of the recent South Korean government's decision, despite wide opposition from citizens and academia, to reinstate state-issued textbooks on Korean history, that will attempt to whitewash the true nature of colonial period's pro-Japanese collaborators and post-liberation dictatorships. The last time these textbooks were state-issued was during the Park Chung Hee (father of the current South Korean president Park Geun-hye) dictatorship.

Both Prime Minister Shinzo Abe of Japan and President Park Geun-hye of South Korea are pushing to have high school history textbooks in their countries rewritten to reflect their political views.
Mr. Abe has instructed the Education Ministry to approve only textbooks that promote patriotism. He is primarily concerned about the World War II era, and wants to shift the focus away from disgraceful chapters in that history. For example, he wants the Korean “comfort women” issue taken out of textbooks, and he wants to downplay the mass killings committed by Japanese troops in Nanking. His critics say he is trying to foster dangerous nationalism by sanitizing Japan’s wartime aggression.

Ms. Park is concerned about the portrayal of Japanese colonialism and the postcolonial South Korean dictatorships in history books. She wants to downplay Korean collaboration with the Japanese colonial authorities and last summer pushed the South Korean Education Ministry to approve a new textbook that says those who worked with the Japanese did so under coercion. (A majority of professionals and elite civil servants today come from families that worked with the Japanese colonizers.) Academics, trade unions and teachers have accused Ms. Park of distorting history.
Mr. Abe and Ms. Park both have personal family histories that make them sensitive to the war and collaboration. After Japan’s defeat in the war, the Allied powers arrested Mr. Abe’s grandfather, Nobusuke Kishi, as a suspected class A war criminal. Ms. Park’s father, Park Chung-hee, was an Imperial Japanese Army officer during the colonial era and South Korea’s military dictator from 1962 to 1979. In both countries, these dangerous efforts to revise textbooks threaten to thwart the lessons of history.