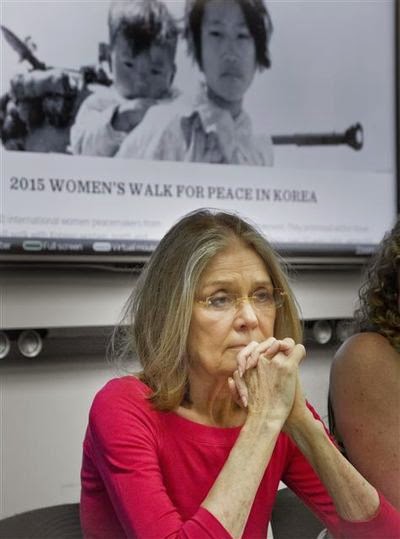 From The Hankyoreh Newspaper in Seoul, Korea: http://english.hani.co.kr/arti/english_edition/e_national/682155.html

Eyes are on Korea after a group of well-known female peace activists announced they will walk across the DMZ on May 24 for peace on the peninsula. The event suggests that women around the world are becoming more involved in the Korean Peninsula, which remains trapped in the Cold War even 70 years after the end of World War II.
In its coverage of the press conference for the event, which was held at the UN headquarters in New York on Mar. 11, the Associated Press said that “prominent women” were “making a dramatic statement in Korean relations.”
Along with two recipients of the Nobel peace prize - Mairead Maguire and Leymah Gbowee - women from a variety of backgrounds will be joining in the walk, including writers, scholars, filmmakers, and humanitarian activists. Most of the 30 participants, who hail from 12 countries, will be paying their travel expenses out of pocket.
Gloria Steinem, 81, regarded as an icon of the women’s movement in the US, drew attention by signing on as honorary co-chair of the event.
Steinem, who played a leading role in the feminist movement in the US in the 1960s and 1970s and was active in social issues and the peace movement after that, received the Presidential Medal of Freedom in 2013, the greatest honor that the US President can bestow on a private individual.
Steinem has taken great interest in the event, as her attendance at the press conference suggests. “It’s hard to imagine a more physical symbol of the insanity of dividing human beings than this zone. To me, to walk across it, has huge, huge, huge importance,” Agence France-Presse quoted her as saying.
Steinem’s deep interest in Korean Peninsula issues reportedly goes back to the sad story of a high school friend who was received a draft notice to fight in the Korean War.
“The friend’s father had suffered from trauma in the Second World War, and when he saw his son’s draft notice, he decided he couldn’t allow him to go to war,” explained Chung Hyun-kyung, a professor at New York’s Union Theological Seminary and member of the event’s executive committee. “So he killed his son and then himself.”
“Steinem noted that women had made a big contribution to ending conflict in Northern Ireland and Liberia, and she asked why that wouldn’t work on the Korean Peninsula too,” Chung added.
Abigail Disney, granddaughter of Walt, began making movies after meeting the Liberian female peace activist Leymah Gbowee in 2006. In 2008, she shared the story of the country’s peace movement with “Pray the Devil Back to Hell,” a documentary about Gbowee.
Other participants included Medea Benjamin, co-founded of the leading women’s anti-war group Code Pink, and Ann Wright, a former US Army colonel who resigned from the State Department in 2003 in protest of the Iraq War.
Among the Korean and Korean-American participants joining them were Rutgers University professor Suzy Kim, Korea Policy Institute co-founder Christine Ahn, Chung, and women’s rights activist Kim Ban-a.
Foreign nationals don’t need approval from the South Korean government to visit North Korea, but they would need to apply with the UN Command to pass through the DMZ. Foreign nationals traveling between North and South Korea must pass through South Korean government immigration procedures.
“If we are provided with specific plans, including their course while traveling in North Korea, then it’s a matter for discussion with the relevant agency,” a Unification Ministry official explained.