"Would Park be President, had the election not been rigged?" 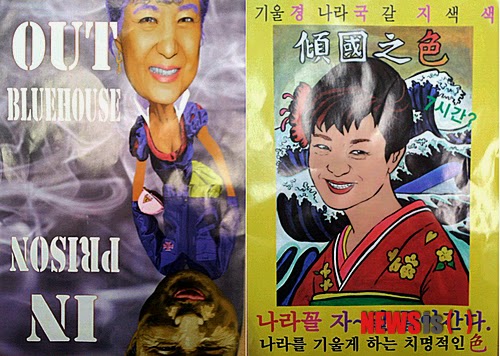 President Park Geun-hye of South Korea is facing political troubles and unpopularity, due to her leadership style, squabbles in her inner circle, suppression of dissent and free expression, and the recent court ruling that the government agency interfered in the last election which elected her president. The photo above shows posters critical of Park that surfaced in Pusan, a southern city with strong conservative constituents.

The following is an editorial in the Hankyoreh Newspaper, Seoul, Korea.

Would Park be President, had the election not been rigged?

An appeals court’s ruling about election interference by the National Intelligence Service (NIS) provides judicial confirmation that there is a major problem with Park Geun-hye legitimacy as president of South Korea. This makes it clear that the 2012 presidential election was a rigged game and that Park was the greatest beneficiary.


Despite this, the Blue House is remaining tight-lipped about the entire affair. Facing a barrage of questions by reporters on Feb. 10, Blue House spokesperson Min Kyung-wook declined to comment, only remarking that even a spokesperson has the right to remain silent.

One can conjecture the extent of the Blue House’s shock and consternation. It’s no wonder that Park is getting a big headache, with the legitimacy of her presidency in question at the same time her approval rating is plummeting.

Even so, Park cannot resolve her current predicament by ignoring and refusing to talk about it. The very assumption that the Blue House has the “right to remain silent” is a serious blunder.
Any politician - not to mention the leader of a country - must take responsibility for his or her words. Park should begin by apologizing for remarks she has made, such as when she belittled the case as a plot by the political opposition and denied that she had received any help from the NIS.
But Park’s remarks are not the only mistake that she made. The current administration pulled out all the stops to cover up the NIS‘s assault on the constitution and to block all attempts to investigate that assault.

The figures who confidently stated that Won Sei-hoon was not guilty of violating the Public Official Election Act are still in their positions in the government. Clearly, the next step should be to discipline the people who obstructed this investigation, starting from Justice Minister Hwang Kyo-ahn.

It will also be necessary to continue the investigation of the NIS’s interference in politics. Even former president Lee Myung-bak may have to be questioned, if that is what it takes to determine where Won Sei-hoon was getting his orders.

The fact is that when this scandal came to light, Park’s course was laid out for her. She ought to have come before the public humbly to acknowledge the flaws in the election process. As a president whose election undermined the democratic system, Park ought to have dedicated herself to treasuring and nourishing that democratic system. If she had done that, people might have seen her as having become an even better president, precisely because of the concerns about her legitimacy.
But Park instead went in the opposite direction, and now she finds herself in a real bind. This is when things get interesting. If Park cannot shake off her deluded sense of self-importance, she will find herself sinking deeper and deeper into quicksand. Park should tremble to think that, when weighed in the balance of history, the verdict may be that she was a terrible president who would not even have been elected if the election had not been rigged.