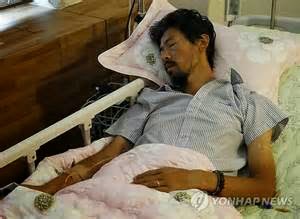 Demand for a special law to investigate the Sewol Ferry Disaster has engulfed South Korea and overseas Koreans, symbolized by Kim Yeong-oh (photo above), a father of a student lost in the Sewol sinking, who is now on 44-day hunger strike for the enactment of the special law.

Despite demands by the Sewol victims' families (who are camping outside the presidential office until the demand is met), opposition party members, and concerned citizens calling for the special law, which would provide independent and impartial investigative and prosecutorial powers in pinpointing true causes of the incident, the Park Geun-hye government is not yielding to the demand, citing that no special law is needed.

Solidarity hunger strike has also spread, as Moon Jae-in, the presidential candidate in the last election, is now in his 8-day hunger strike, and other Koreans are doing one-day relay hunger strikes all over the world.

Sewol ferry sank on April 16, 2014, off the southwestern coast of Korea, with death toll of 294 on-board, most of whom were students from a particular high school en route to a school field trip. The incident revealed gross negligence and unpreparedness of large emergencies by South Korean authorities, filled with corruption and negligence in safety inspections and following safety protocols, lack of emergency procedure trainings and executions, and inept responses by maritime police and rescue units that prolonged the rescue time.