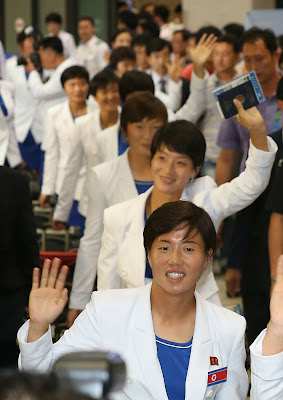 North Korea has sent its national team to Incheon, South Korea to participate in the 17th Asian Games.

South Korea is the host to this year’s event, but due to its domestic security laws regarding North Korea, controversies arose already. First, South Korean government has forbidden raising of the flags of participating nations of the games in order to singularly forbid North Korean flag from being seen outside the games’ official site – which is unprecedented measure and may go against the policies of the games. North Korean players may hoist their flag in the players’ housing area, but if South Koreans displayed the North Korean flag outside the site, they will be prosecuted under the draconian National Security Law. Second, North Korean journalists who accompanied the team were unable to send reports home because South Korean authorities block North Korean Internet sites.

With these residues of inter-Korea confrontation aside, Koreans will likely cheer both teams, and hopefully conciliatory mood will prevail and help towards warming of inter-Korea relations.

In another incident, FIFA authorities banned the displaying of "One Korea" flag by the spectators at the U20 Women's World Cup games, despite the fact that the flag that contains the image of the Korean Peninsula, symbolizing the yearning for Korean reunification, has been displayed widely at international sports events involving both Korean teams, including the Olympics, and at official inter-Korea meetings and functions. FIFA even sanctioned the North Korean soccer federation regarding the display of the flag, even though Korean Canadian and Korean American fans displayed the flag at the games independently.