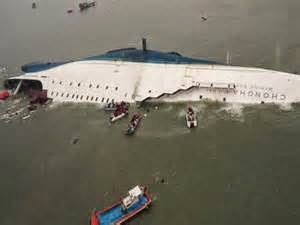 The terrible accident of Sewol ferry in South Korea is likely to claim 302 victims, when the remaining bodies are all recovered. The sadness has turned into mass anger of the Korean people as it was revealed that the captain of the ship told the passengers to stay put in their cabins instead of following proper emergency procedures, also the captain and the crew were the first to abandon the ship and get onto the rescue ship -- leaving behind the passengers without any assistance or guidance from the crew.  The majority of the deceased are high school students from the same high school on their way to a field trip to Jeju Island, who "obeyed" the orders of the elders to remain in the lower decks -- while the ship was capsizing. The entire crew survived.

Moreover, the incident revealed gross negligence and unpreparedness of large emergencies by South Korean authorities, filled with corruption and negligence in safety inspections and following safety protocols, lack of emergency procedure trainings and executions, and inept responses by maritime police and rescue units that prolonged the rescue time.

The government of President Park Geun-hye is also under fire for inept structural emergency planning and preparedness. The poor rescue effort and high casualty rate did not go well with the image of South Korea as a global economic powerhouse and advanced nation. South Korean authorities need to learn the lessons from this tragedy/debacle and institute fundamental and over-reaching changes to policies and practices of national and local emergency preparedness that value human lives and safety most of all.