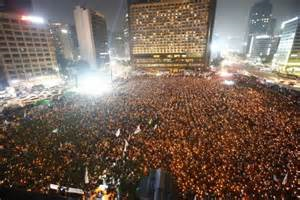 Less than six months into the new administration of Pres. Park Geun-hye, Korean citizens are back on the streets in massive candlelight vigils, in protest following the revelation that the Korean intelligence agency interfered with the last presidential election by disseminating negative comments about the opposition candidate (Moon Jae-in) using social media outlets, in a clear violation and abuse of the government's stated neutrality in election matters. There are even calls for the abolition of the intelligence agency, the successor to the infamous Korean C.I.A. which had a long history of abuses tied to being a crucial instrument of terror in aiding the dictatorial rule of  Park Chung-hee (the father of Paek Geun-ye) from the 60s to the 80s.