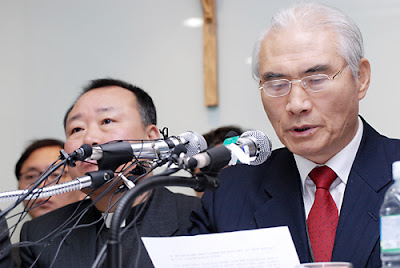 Oh Jong-Ryol (photo above), who is the leader of the delegation from a South Korean peace coalition, Citizen's Solidarity for Antiwar Peace Movement, was en route to the U.S. on a public speaking tour. On April 30 at the Tokyo airport while he was changing planes to go to the U.S., he was approached by a staff of the U.S. Embassy in Japan who informed him that he is being denied entry into the U.S. and Mr. Oh had to return to South Korea.
Mr. Oh and three others were planning to travel to the U.S. on a speaking tour to share their messages for a peaceful resolution of the current crisis in the Korean Peninsula. Mr. Oh had visited the U.S. several times before without any incidents or denial of entry. Mr. Oh is a veteran elder activist who has promoted peace and justice in nonviolent ways. There is no reason to deny his visit to the U.S., where public events were planned in New York City, Washington, DC, and Los Angeles with Korean-American and American organizations.
There is no valid reason why Mr. Oh was denied entry into the U.S. this time. Most likely, the South Korean authorities tipped the U.S. authorities about the activists' plans in the U.S., which coincided with the visit by President Park Geun-hye. This kind of maneuvering by South Korean government is like reverting to the authoritarian days of Park's father, dictator Park Chung Hee, when political opponents and activists were blacklisted and denied freedom of speech and movement, and contradicts President Park's promise of openness in governance. This regretable, arbitrary and unjust measure and complicity by the U.S. Government is a violation of Mr. Oh's human rights and affront to democratic ideals and processes.