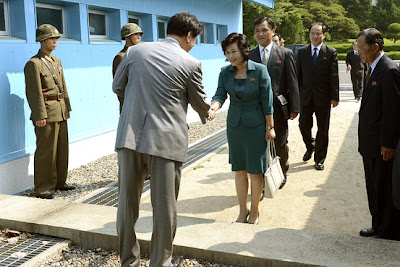 After several years of acute animosity, the two sides of Korea will give a try at dialog, again. The two sides have agreed to hold a ministerial meeting on June 12 to discuss ways to reboot the inter-Korea economic ventures (Kaesung factory complex and Mout Keumgang tourism) and resume inter-Korea civilian exchanges. Hopefully the dialog this time around can give a fresh re-start on promised inter-Korea reconciliation and exchanges geared to promote lasting peace and cooperation in the Korean Peninsula.  [The photo shows representatives of the two sides meeting for a preparatory meeting at Panmunjeom.]

[Follow-Up] Was it too good to be true? The ministerial meeting has failed to materialize as the two sides disagreed on who would head each side's delegation. This may be symptomatic of the up-and-down history of inter-Korea dialog.