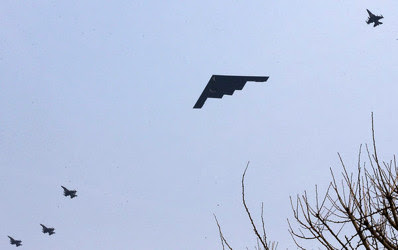 The American Friends Service Committee (AFSC) has long opposed military actions on the Korean peninsula that serve to deepen and prolong a conflict that has persisted since the Korean War. This month another round of military actions and escalations by all parties are now underway in the region, including repeated simulated U.S. nuclear attacks against North Korea by B-2 and B-52 bombers in the midst of ongoing U.S.-South Korean war games. We call once again for an end to such provocative actions and a concerted effort to de-escalate and resolve the longstanding regional conflict that has taken a deep, generations-long toll on the region.

Such simulations and the history of U.S. nuclear threats during past Korean crises contributed to the development of North Korea's nuclear arsenal and its recent nuclear test, threatening to ignite a regional nuclear arms race. Military threats made routinely by North and South Korea as well as recent and possibly related cyber-attacks against North Korean media outlets and against South Korean broadcasters and banks further escalate the conflict.

Provocations of this sort - routine or otherwise - can too easily lead to miscalculations, and generate fears and passions that make it difficult for political leaders to respond with necessary caution. We are sobered by the memory of how such miscalculations have triggered cataclysmic wars in the past and even brought nuclear powers to the brink of all-out war.

The escalation of tensions and confrontations needs to be halted:
To set relations on a better course: