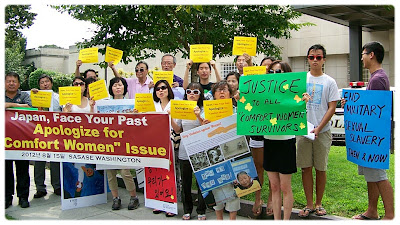 Sixty-seven years since Japan was defeated in the World War II, the lingering issues surrounding Japan's wartime crimes persist because Japan is not forthcoming in acknowledging its past actions during the war, known for brutal conquests and barbaric treatment of subjects in occupied territories. The military "comfort women" or enforced sex slaves issue stands out, because, despite the appeals of the aging survivors for Japan's acknowledgement and apology, Japanese authorities continue to downplay the issue by excluding the issue in its textbooks or implying that this was a voluntary prostitution (there were Japanese prostitutes in the system, but those recruited from colonial areas were recruited forceably or tricked into it with promise of factory jobs). Meanwhile, demonstrations in front of the Japanese embassy in Seoul, as well as in Washington, DC (above photo), continue on.

The issue is pertinent today as there are pockets of sexual assaults in war zones around the world, as well as human trafficking of sex slaves. The Korean "comfort women" survivors have raised this connection of the past and present and have started a fund-raising campaign to aid the present victims of military sex assaults in Africa.