Protesters on Lee Myung-bak's State Visit to the U.S. 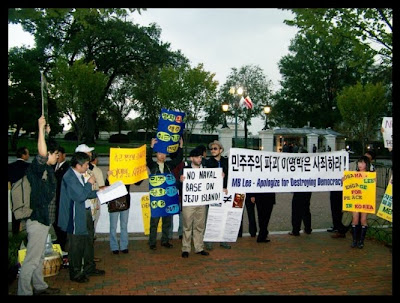 While President Lee Myung-bak of South Korea came to Washington with much fanfare for a state visit, opponents of his policies held a rally during the state dinner; the following is the statement from the rally:
----------

We have gathered in front of the White House to voice our anger at the South Korean President Lee Myung-bak, whose government has reversed the trend towards democracy, prosperity, peace and social welfare espoused by the two previous administrations of Presidents Kim Dae Jung and Roh Moo-hyun -- and instead pursued policies that are ant-democratic, anti-peace, and anti-citizen welfare.

Instead of promoting the advancement of Korea’s national economy and the general welfare of the people, President Lee has pushed for his personal agenda and enrichment of his family members through favors, governmental contracts, and shady, speculative land investments. His government officials have been mired in corruption scandals.

Moreover, the Lee government has reversed the years of hard-earned democratic gains by restricting the freedoms of press, assembly, expression and is criticized from all sides for practicing autocratic and unilateral approach towards governance. No wonder South Korea is back in the headlines of the Amnesty International reports for cases of human rights abuses.

Also, we ask President Obama and President Lee to pursue more sincere and pro-active approach towards ensuring peace and reunification of Korea by pursuing an engagement policy that aims to resolve contending issues peacefully, rather than resorting to arms buildup and arms race in the Northeast Asia region.