A Civic Activist Becomes the Mayor of Seoul 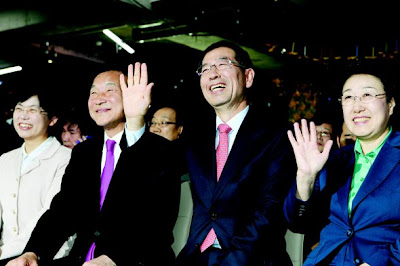 Park Won-soon (second from the right on the photo, with supporters from other opposition party leaders) -- human rights lawyer, pro-democracy activist, and a leader of South Korea's grassroots civil society organizations -- was elected as the next mayor of Seoul.

This election was significant in many ways in that 1) a political novice and independent candidate won a major election, bypassing more well-known candidates from the established parties; 2) the opposition parties fielded a unified candidate (by supporting a non-affiliated candidate) which helped prevent splintering of votes that arose in the past elections with the usual array of many opposition candidates; 3) it is an indicator of the populace's dissatisfaction with the ruling Lee Myung-bak government and its policies that will impact upcoming general and presidential elections in 2012; 4) the younger generations have voted strongly for Park, suggesting that they yearn for change from the established politics and economic inequities and hardships.

With his long experiences in civic activities and citizen watchdog groups, Park will be in a good position to promote genuine and popular reforms based on true fairness and social justice.