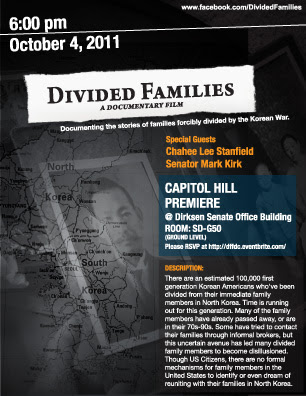 This new documentary film (Divided Families), directed and produced by two Korean-American university students (Jason Ahn, Eugene Chung), screened at the U.S. Senate building on Oct. 4, 2011. It is a moving film that highlights the pains of separated families due to the Korean War and the prolonged division, focusing on separated Korean-American family members in their attempts to reunite with their loved ones in North Korea. The filmmakers are not professional filmmakers, but they made the film in their desire to spread the word around about this critical and not well-known issue. The audience was full of young Korean Americans -- indicating strong interests and activism on this issue from the second-generation Korean Americans. Hopefully, this issue will get more attention and resolution, vis-a-vis a peaceful settlement in the Korean Peninsula.

Labels: Activism, Family Reunion, Korean reconciliation, Koreans in the US