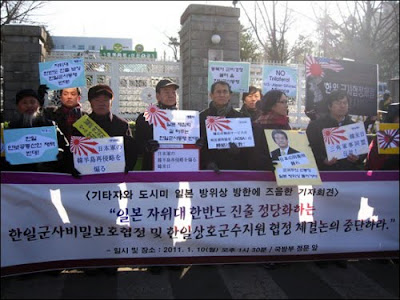 Something unthinkable is happenning -- South Korea and Japan are talking of closer military cooperation, starting with sharing of military intelligence, but which may lead to other forms of closer cooperation. There have been loose cooperations in the context with the U.S.-Japan-South Korea alliance in the region, but never a direct military cooperation between Tokyo and Seoul. The governments point this as a response to North Korean provocations, but South Korean citizens are outraged at a possibility that Japanese troops may again set foot on Korea [see above photo].

This is another step that will inadvertently contribute in escalating the tense situation in the Korean Peninsula, combined with the refusals on recent offers of dialog from Pyongyang.