What Will 2011 Bring to the Korean Peninsula? 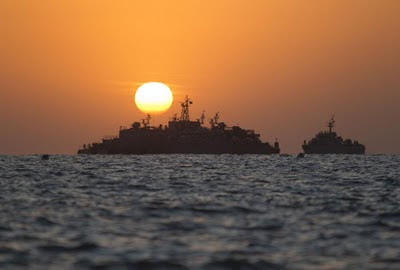 The tumultuous year ﻿2010 in Korea has passed and a new year has arrived (Korea time). What will the new year bring to the Korean Peninsula?
After the Yeonpyeong Island artillery incident, South Korea went on a near-war mode as it revived civilian air raid drill (regularly-occuring drills that were cancelled during the past decade when inter-Korea relations were warmer), held live-fire artillery exercise in the disputed area despite warnings from North Korea, and engaged in massive naval and joint military exercises as a show of force. China and Russia expressed their weariness on the U.S.'s show of force in the region and announced their own joint military exercises in the region.
Despite escalating military tensions and war hysteria, both sides have cooled down. North Korea blasted South Korea-U.S. maneuvers, but it did not retaliate further. South Korea's hawkish stance must have backfired as Pres. Lee Mying-bak's popularity is spiralling down and it is now calling for the revival of the six-party talks aimed at North Korea's nuclear disarmament. The Obama administration must have gotten some indirect assessment of North Korea's stance via Governor Bill Richardson's recent visit to Pyongyang. All these point to negotiated settlement as the only viable option towards peace settlement in the Korean Peninsula -- all concerned parties need to work on it in 2011.