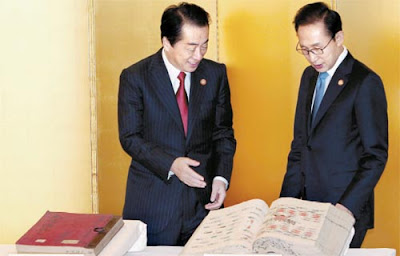 South Korea and Japan signed a treaty on Nov. 14 confirming the return of 1,205 Korean royal books taken during Japan’s colonial rule of Korea. (The photo shows Japan’s Prime Minister Naoto Kan, left, and Korean Pres. Lee Myung-bak looking at the books to be returned to Korea.)

In a related development, France has agreed to return on a permanent lease basis a collection of royal documents considered national treasures by South Korea and seized by the French navy in the 19th century, during attempts to forcibly open Korea to the West.

These are good developments as nations attempt to rectify and reconcile colonial wrongdoings, yet Japan has a long way to go towards historical reconciliation with Korea, as it needs to acknowledge war crimes committed during its imperial expansion, mainly on the "comfort women" (military sex slave) issue. Activists and former "comfort women" have been demonstrating in front of Japan's embassy in Seoul every Wednesday for the past twenty years, asking for acknowledgement and apology, yet not a single representative of Japan has acknowledged the protesters' presence.