The Confrontation in the West Sea Area Begs Peaceful Settlement 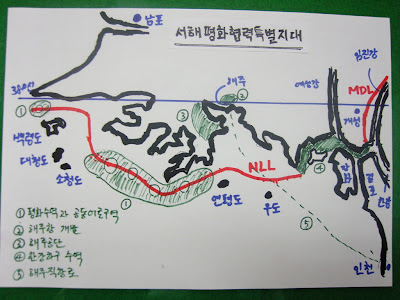 Guns have flared again dangerously in Korea -- in Yeonpyeong Island in the West Sea (Yellow Sea), within the disputed maritime border area between the two sides of Korea. Despite North Korea's claim that its action was in retaliation to its vocally-protested South Korea's naval exercises in the region, the North Korean military was wrong to fire its artillery directly at the island, hitting both military and civilian targets, resulting in military and civilian casualties and substantial damage to the island. This in turn prompted South Korea to return artillery fire to the North Korean shore.

This confrontation is one of many deadly clashes that has occurred in this area, due to the long-standing dispute arising from the unsettled vestige of the Korean War and the fragility of its armistice, which still stands to this day -- 57 years after its signing. Unlike the land-based DMZ agreed upon by the Korean War armistice, the maritime border was not clearly delineated. The UN command then unilaterally created the Northern Limit Line (NLL), which encroaches dangerously close to North Korea's shores in the area (just 7.5 miles from Yeonpyeong Island to North Korea) -- and which expectedly North Korea does not acknowledge.

The above photo shows an outline of the proposed "Special Area for West Sea Peace Cooperation" around the NLL, agreed as a part of the October 4, 2007 Joint Declaration by then-President Roh Moo-hyun of South Korea and Chairman Kim Jong-il of North Korea. The shaded, numbered areas indicate proposed areas of cooperation and development for joint peaceful usage such as joint fishery and economic zone, with the idea of promoting inter-Korea collaboration instead of continuously engaging in deadly military standoff in the area. Had this agreement been implemented by the succeeding administration of President Lee Myong-bak, the clashes in the West Sea would have surely been prevented. Lee administration's other hardline policies toward North Korea did not help the situation.

With Washington's refusal on North Korea's request for direct talks and Seoul's denouncement of the Sunshine Policy of inter-Korea rapproachement, Pyongyang may have hastily and dangerously gambled on a dramatic attempt to get the issue in the front burner of the world stage, along with its recent revelation of uranium enrichment activities. If all parties agree that escalation of the current crisis needs to be prevented to avoid an all-out war and its unimaginable destruction and casualties, all avenues towards a peaceful settlement must be pursued. In this spirit, former U.S. President Jimmy Carter responded quickly to the current crisis, calling for engagement with North Korea. On the other hand, the usual repetition of show of military force using joint U.S.-South Korea exercises including a nuclear-powered U.S. aircraft carrier in the West Sea will not be conducive to this path.

You have done your readers a service by putting the current incident in a historical context.

The Northern Limit Line is not a mutually recognized boundry between ROK and DPRK. What rational can the ROK give for firing live ammunition into waters claimed by the DPRK? But I agree with you that the DPRK's response that is reported to have taken civilian lives, if true was a mistake.

Your readers might find this analysis from India helpful

This editorial on Nov 25 from The Hindu ends with this observation:

"... there can be no substitute for a peace treaty to end the Korean War, and for the recognition by the rest of the world of the DPRK's borders and legitimacy. Meanwhile, every effort must be made to persuade the two Koreas to behave sensibly and responsibly."

We need all those who stand for peace to call for de-escalation on the Korean peninsula and an immediate end to the U.S.-South Korean war games.

Join the National Campaign to End the Korean War (www.endthekoreanwar.org ) in a coordinated "online demonstration" -

1. Barrage the White House and State Department with emails and urge
President Obama and State Secretary Clinton to immediately stop the
joint U.S.-South Korean war maneuvers, and sign a Peace Treaty to end
the state of war that has existed for sixty years on the Korean
peninsula-
www.whitehouse.gov/contact
contact-us.state.gov