Growing Voices for Peace in Korea 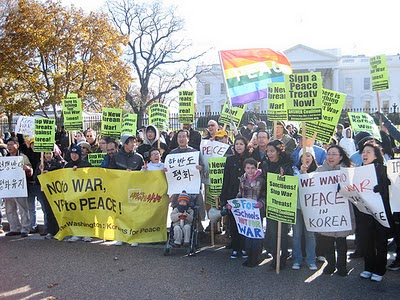 In response to the tense military situation in the Korean peninsula and dangers of further escalation, voices for peace and engagement are growing in the U.S. Demonstration for peace was held in front of the White House on November 27 (above photo) with participation by peace activists (including Korean War and Vietnam War veterans) and concerned Korean-Americans; other rallies are planned for New York City, San Francisco and Los Angeles.

U.S.-based organizations that have mobilized for peace in Korea include the National Campaign to End the Korean War, the Alliance of Concerned Scholars about Korea, the Korea Policy Institute, and Nodutdol, among others. Calls for engagement with North Korea for a peaceful settlement abound in the media: Tim Shorrock on Democracy Now, John Feffer on The Huffington Post. Those U.S. experts who have recently returned from a visit to North Korea (revealing a new North Korean uranium enrichment program) are calling for engagement as well: Siegfried Hecker, Bob Carlin and John Lewis. Peace organizations in South Korea as well as civil society groups are also calling for dialogue and a peaceful settlement.