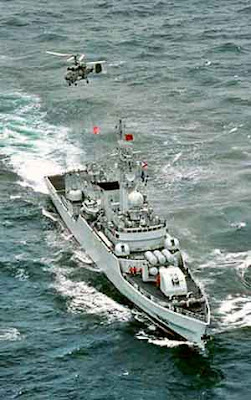 As China (photo), the U.S. and South Korea engage in more military exercises in the Yellow Sea (West Sea) and as Washington implement further sanctions against North Korea, there are also talks of possible resumptions of six-party talks, as hinted during Kim Jong-il's meeting with Hu Jintao in China.

Unusually, two op-ed articles on Korea appeared in The New York Times on the same day on Aug. 31: neocon Paul Wofowitz's article "In Korea, a Model for Iraq," comparing US troops' role and legacy to that of South Korea appeared in the US edition, and Donald Gregg's piece "Testing North Korean Waters," explaining Cheonan incident and the need for engagement policy was featured in the global edition only.

It is interesting what Gregg had to say: "South Korea has not officially referred to the Russian conclusions [its own investigation of the Cheonan report]. When I asked a well-placed Russian friend why the report has not been made public, he replied, 'Because it would do much political damage to President Lee Myung-bak and would embarrass President Obama.'" Looks like the controversy over the Cheonan incident findings will not go away easily.