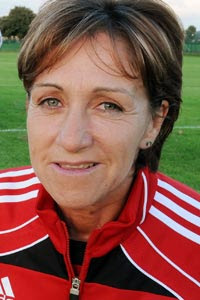 While North Korea is portrayed as isolatd from the West, an English women's soccer team is touring North Korea as part of sports and cultural exchange.

Middlesbrough Football Club (MFC) women's team (photo: manager Marrie Wieczorek) has been invited by the British Embassy in Pyongyang in recognition of the strong bonds Middlesbrough has shared with North Korea since the 1966 World Cup in England when the townsfolks became fans of the North Korean team during the team's remarkable feat at the games. The 1966 North Korean team paid a return visit to Middlesbrough in October 2002.

Nick Bonner, who made a documentary The Game of their Lives about the 1966 World Cup team with his business partner Dan Gordon, and who helped arrange the women team's visit to North Korea, said: “There is no doubt about it that [North Koreans] came to England in 1966 as the enemy, as many English people had fought in the Korean War, but the people of [Middlesbrough] adopted them as their team and they have never forgotten that.”

Such people-to-people exchanges can help bring reconciliation between former enemies.