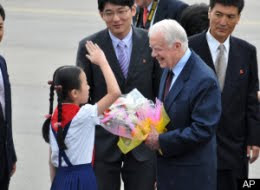 Jimmy Carter is at it again, visiting North Korea on an unofficial mission to resolve sticky issues between Washington and Pyongyang. In 1994, the former president's trip to Pyongyang helped broker a nuclear disarmament agreement. Now, Carter is mediating pardon/release of Aijalon Mahli Gomes, an American jailed in North Korea for illegal entry. Pundits are speculating that Carter's visit and talks with North Korean officials may bring some movement in the stalled relations between Washington and Pyongyang, when the Obama administration is said to be looking for "fresh options."